At the 2016 annual conference for Parks and Recreation Ontario, Preston Stringer of Earthscape and Heather Flaherty of the City of Guelph, proudly accepted an Excellence in Design Award for the Exhibition Park Playground.

The following was read aloud at the Gala Award Ceremony during the presentation:

“Play might be seen as something of the past… and risky play all but forgotten. But not in Guelph. Inspired by European design, Guelph has created the Exhibition Park Playground, an aesthetically pleasing, challenging yet safe, and – perhaps best of all – all-ages friendly play space! The design creates opportunities over multiple zones for different age groups and abilities. Play areas feature different media, such as wood, ropes, nets and boulders, meeting at varying angles and heights which test an individual’s developing abilities. The play structures blend with the surroundings of sand, trees and grass to create a real sense of playing in nature.

Parent Ellyn Lusis says, ‘Parents have places to sit and watch, and kids no longer need their parents to help them onto equipment. The kids are thrilled to challenge themselves and, each time I visit, I hear some child call out to their parent: ‘Look at me!’ And teens aren’t left out of this either as they are often found challenging their abilities too. Risky play… it could make you want to wish you grew up in Guelph…”

Read the City of Guelph’s Media Release about the Excellence in Design Award here. 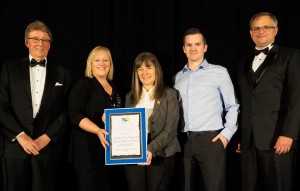