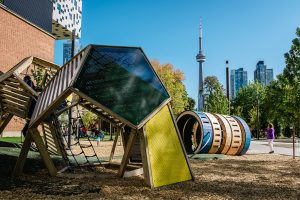 July 1st 2017 marked the grand opening of the Grange Park playground. The playground neighbours the Art Gallery of Ontario and the Ontario College of Art & Design in downtown Toronto. The new playground is part of a larger park revitalization project. PFS Studio was the Prime Consultant and Lead Designer and Earthscape joined the team as a design-build partner.

In homage to its neighbours, the playground represents elements of an artist’s studio after a frenzy of work. The north playground features climbing structures themed as a spilled paint can and crumpled paper. Similarly, the south playground includes an elevated colourful artist’s palette nestled among mature trees. This is connected via rope bridge to a conté crayon tower with a 10′ slide. Moreover, a squished paint tube sits nearby. The art-themed playground offers an incredible amount of play value while inspiring creativity in play.

The Grange Park/AGO playground was also a ‘featured playground’ in the list of Canada’s coolest 150 playgrounds. The list was compiled by nine playground writers from across Canada, led by Dana at the Calgary Playground Review.