Earthscape was honoured alongside project collaborators at the City of Toronto Urban Design Awards as the Grange Park Revitalization received an Award of Excellence for Large Places and/or Neighbourhood Designs.

“At a time when urban greenspace is at an all-time premium, the revitalization of Grange Park is a welcome redesign that feels at once fresh and timeless, and does a lot with relatively little space for its program. Generous paths balance open sight lines with sheltered nooks and “rooms,” with welcome shade from a carefully maintained mature tree canopy. The jury noted that the paths loop around a central lawn that doubles as green infrastructure to soak and slow stormwater while providing much-needed open public space for gathering, playing, celebrating and sitting. The enclosed dog run in the wooded southern section provides a safe and separated solution for fourlegged friends, while the playground offers fountains, climbers and adventure in an understated but creative corner. The jury was impressed with the park’s quiet confidence and capable program, offset against the gravitas of the Art Gallery of Ontario, a stately backdrop for this people’s park for the 21st century.” 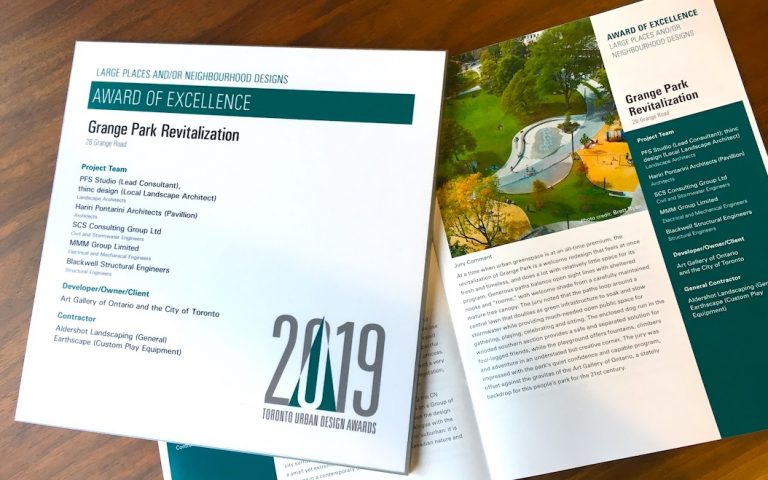 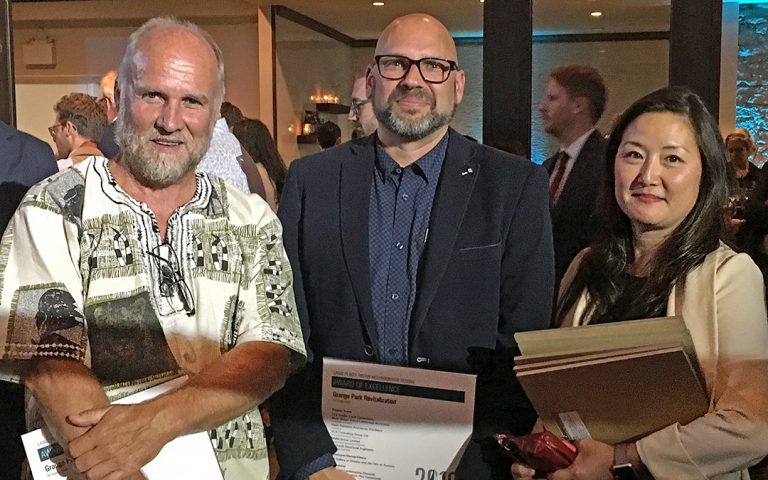 Situated in downtown Toronto, Grange Park is framed to the north by the Art Gallery of Ontario and to east by the iconic table-top building of the Ontario College of Art and Design (OCAD). In homage to these iconic neighbours, PFS Studio imagined an art-themed destination playground.

In 2008, an advisory committee of local residents, the Art Gallery of Ontario, the City of Toronto and local organizations formed with the goal of renovating Grange Park, including the expansion of the playground, green space improvement, new water features and seating areas. An ambitious undertaking, the City of Toronto, the W. Garfield Weston Foundation, the Art Gallery of Ontario, and the Grange Park Advisory Committee supported the project. PFS Studio was the prime consultant responsible for the redesign of the park.

The playground was conceptualized as an artist’s studio where a frenzy of work resulted in a spilled paint can, a squished paint tube, an abandoned painter’s palette, thrown conté charcoal pencils and tossed crumpled paper. Earthscape was brought on board to engineer the detailed designs and build the playable wooden sculptures and towers. The larger-than-life art tools are the focal point of the play space that opened in 2017.

Wood was the preferred construction material for these playable sculptures because it allowed complete customization and immeasurable creativity and intentionality in design. The texture of handcrafted wood invites human touch and its heat coefficient makes it neither too warm, nor too cold, regardless of the outdoor temperature. Historically, playgrounds in urban environments were intended to replicate the experience of play in the natural world, thus a playground built of wood is an intuitive choice. 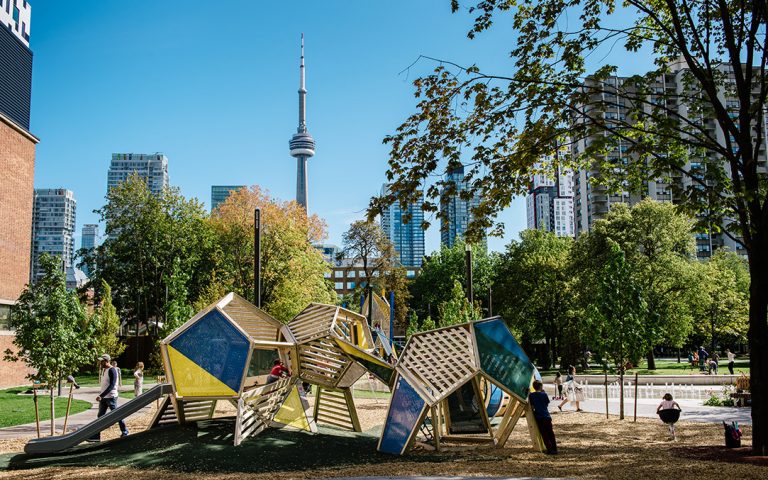 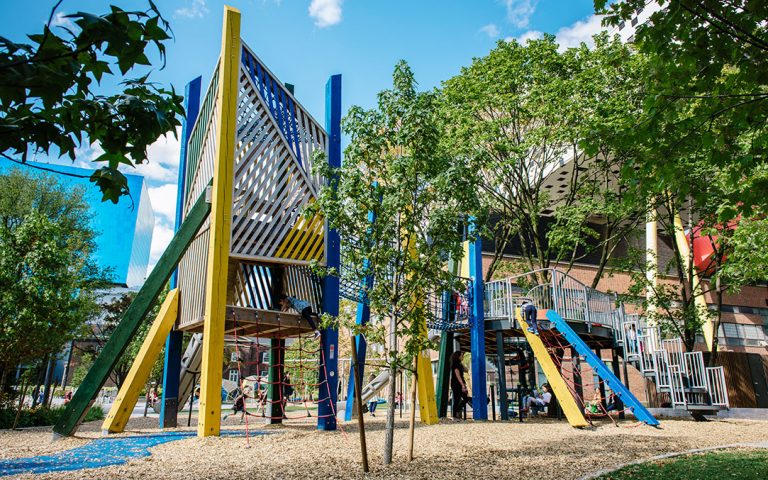 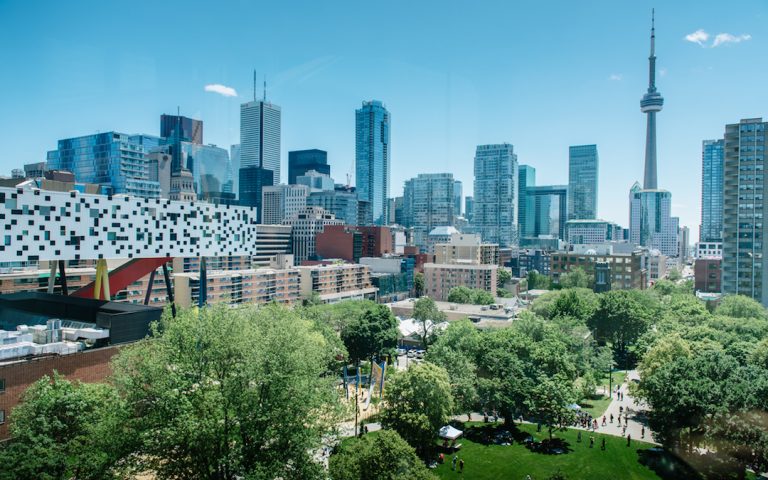 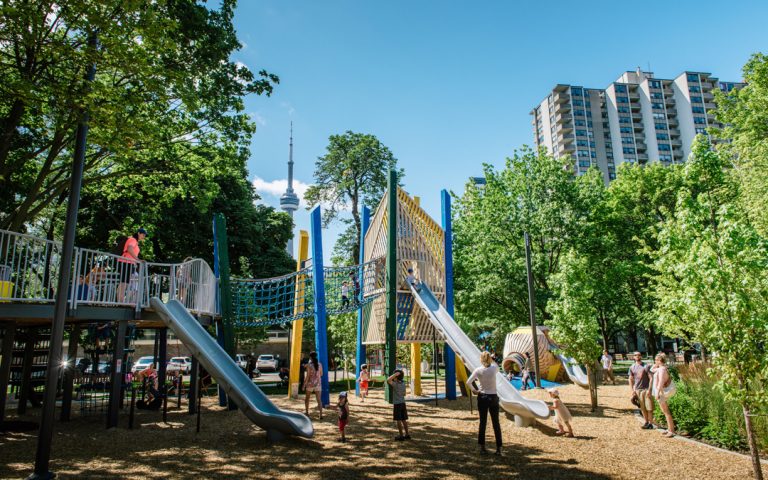 The conté tower consists of two platforms suspended by square posts intended to represent blue, green and yellow conté charcoal pencils. The entire tower leans at a dynamic angle and attaches to an adjacent platform by a net bridge.

The wood cladding of the paint tube was intentionally and abstractly aligned to represent the facets of a squished tube of paint. The one-inch gap between boards allows for visibility, air circulation and moisture evaporation. The coloured metal perforated panels add visual interest and a distinctive texture while maintaining visibility inside the structure for parents and caregivers.

In another area of the playground, the connection of three irregularly-sized polyhedrons create cubbies for climbing, hiding, balancing and sliding. These represent balls of crumpled paper – the unwanted sketches that missed the waste paper basket. The irregular edges and angles creates unique interior spaces filled with rope chaos that creates playful challenges inside the sculpture. Some of the dodecahedron sides are open; others are cladded with perforated metal or wood slats.

The tipped paint can is segmented to allow for multiple climbing, swinging and hanging play opportunities. Handholds were cut into part of the exterior cladding while the metal connecting bars allow kids to climb or hang suspended inside.

This larger-than-life playground fits perfectly among its artistic neighbours, the AGO and OCAD, while igniting the imaginations of children and adults alike. The use of wood was well-suited to the need for flexibility in design and complements the site context and surroundings of the playground.