The ball has dropped. A new decade has begun.  I asked my colleagues to think about the future of playgrounds and do some dreaming on this question: “What will playgrounds look like in 2040?”

Our predictions for the future of playgrounds…

Creative parkette movements like New York’s “Pavement to Playgrounds” will be adopted by cities everywhere. There will be more green and more play in smaller spaces: playground equipment that doubles as a place for gathering or performance; green roofs on playground structures; local artists showcases; customizable and reconfigurable play equipment. Tightly designed play spaces will be woven seamlessly with planting, berms, sand and water.

Today it’s all about combating one-use plastics in the grocery store and straws in our fast-food drinks. But those are just little solutions to a greater concern.

Greta Thunberg was the TIME Person of the Year for 2019 and her generation will be the playground parents of the near future. Increasingly, the demand to hold public projects to a higher “green” standard will be the norm. Currently, the average play structure has a life-span of 20-30 years before being phased out. Where does that structure go after it is decommissioned?

Manufacturers and cities will be incentivized or mandated to have a good answer for this. (They should already!)

Climate resiliency will be a major consideration for all public spaces, including playgrounds. From Miami to Toronto, major investments in waterfront redesigns for the future are underway. Most of these waterfront spaces include playgrounds.

The ability to withstand higher intensity storms and hurricanes is one factor, but the ability to accommodate heavier rainfall and flooding, and the ability of playgrounds to offer protection from intense sunlight exposure and heat will also be design imperatives.

Playgrounds that can generate and collect energy could also be an interesting idea to explore; harnessing visitors’ energy on the playground!

Architect Vishaan Chakrabarti offers an inspirational vision of timeless cities and imagines that technology will help us become a post-wheelchair world. Gone would be the dominant and expansive ramps and stairs in play structures. Larger creative effort will be put on the “invisible” disabilities such as autism and auditory or sight impairments etc.

Apps and simple augmented reality technologies are already sending people on simulated outdoor adventures with their devices. Soon, we will have the Tony Stark ability to give the world its own digital display; this will change the way we explore and play.

Children will always be able to imagine their play structures as fantastical space stations or pirate ships, but soon they could play an augmented game of “The Floor is Lava” next to an erupting Vesuvius! Or, for more passive play, turn on “closed captions” and climb to the highest point in the playground to take in the surrounding world in a new way; instantly learn the names of the birds overhead or the history of nearby architecture.

With the high-density of urban mini-parks we will have to be cautious of the ubiquitous and generic nature of play structures that are trying to make every playground do everything for every user. Cities like San Francisco are leading the way; they effectively view park planning with a wide-angle lens, and avoid cookie cutter experiences in every playground.

This is not for the sake of mere novelty.

A community’s parks must be seen as a holistic system with an understanding of the strengths of each space. When a new playground is proposed, project leaders will cross-check the local inclusivity and play value inventory to determine what is missing in the community in order to steer a unique, rich, and complementary design. Just imagine the diversity of experiences! 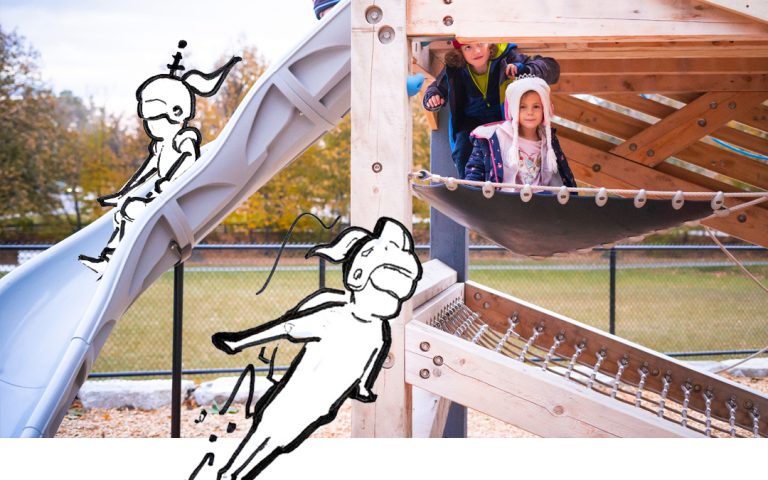 7. Playgrounds for ALL Ages

Despite technology’s attempts to make things better and easier, stress among teenagers and adults is only increasing.

Playground spaces will be more cross-generationally designed to encourage teens and adults to blow off steam, embrace their adventurous instincts and, hopefully, nurture a healthier society.

Data will provide critical feedback to fundamentally answer, “Do people want to come back here to play?” Current metrics to evaluate a play space are fairly rudimentary; mainly focusing on legislated accessibility and safety standards. Metrics to evaluate things like the diversity of play, structure uniqueness, range of user ages, surge occupancy times, length of stay, and level of engagement will become more commonly used in assessing (and procuring) playgrounds.

As cities and researchers publish post-occupancy findings, weighted value can be assigned to these factors to help understand value for communities and purchaser. This will push the market to provide more diversity of playground equipment and more qualitatively thoughtful designs.

In my opinion, the 60s & 70s have always represented the Bronze Age of playground design. A generation of independent designers and makers emerged and many were far more DIY than today.

Design ideas often circle back and we’re beginning to see a grass-roots style play and public works movement in cities like Philadelphia. In time, tools like large scale laser cutters and 3D printers will cost as much as an average home appliance and these will add jet fuel to the fledgling maker space movement.

This new generation of DIY play makers will build on each others’ open-source plans.  Their constructions, in the scale and genre of PlayCubes or Rigamajig, will pop up all over cities and neighborhoods.

What do you think will be the big trends in the future of playgrounds? Should we have added hover-swings and anti-gravity rock walls to our list? We look forward to hearing your ideas for the future of children’s play spaces.  Email us with your feedback at [email protected]!