by Tatiana Zakharova, Playground Designer
(Image above is a composite of Bob Ross, Under Pastel Skies, 1993, oil on canvas, 46 × 61 cm. + Earthscape photo)

From narrative like the Tower of Babel to iconic architectural images like those of the Eiffel Tower or Burj Khalifa, from the snow-covered mountain peaks that grace travel ads and backgrounds of Bob Ross’ paintings to ancient ziggurats and pyramids, the spacial language of verticality is familiar to everyone.

Some argue that tall structures carry a universal appeal.  One is filled with a sense of excitement from simply thinking about reaching the top.  In visually tracing their height, there is a promise of a journey and anticipation of change, tension and thrill:

In densely populated cities around the world, tall buildings allow for maximum use of space while still contributing to the rich sense of placemaking (though many don’t, I’m sure). Cities around the world are recognizable by their skylines, and tall buildings remain desired attractions for locals and tourists alike.  There is a level of intensification with vertical: more people, more activities, more experiences, more technical thought.

The process of designing a tower for a playground is, perhaps, not very different from imagining a tall building for a city.  There are multiple factors to consider, many avenues to explore, different interests to balance.

“Tall” is a relative term.  One is judged tall in relation to someone or something, and can be considered short in another context.  When we think “towers” for playgrounds, we want them to feel tall, not only for kids, but for adults as well.  This way, we try to ensure that play equipment appeals to older children who usually find little of interest on a traditional playground. 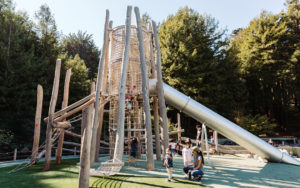 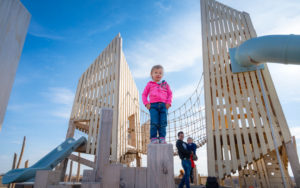 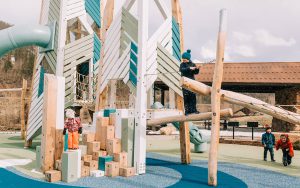 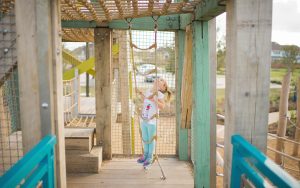 While the verticality is ever-present, the towers themselves can take different shapes: hexagonal, round, square, narrow, wide.  In our projects, we have experimented with towers of abstract shapes, as well as those that speak more directly to the vernacular language of the surrounding landscape.

What about a second one?

Imageability, a term introduced by the American urban theorist Kevin A. Lynch in his seminal book The Image of the City, refers to how easily an object evokes a clear mental image in one’s mind.  Dr. Kheir Al-Kodmany (University of Illinois Chicigo; in Urban Design International, 2011) argues that twin towers, in particular, are intrinsically imageable in their special symmetry and balancing.  They break typical monotony and add to a sense of welcoming; “viewing the sky through the gap between two towers mimics a doorway leading to infinite outer space.”

On playgrounds, twin or even triplet towers certainly possess loads of imageability. But they also create the uniquely thrilling opportunity for children to move between the towers: on suspended bridges, ropes, logs or ladders – an experiential excitement the kids aren’t likely to forget! 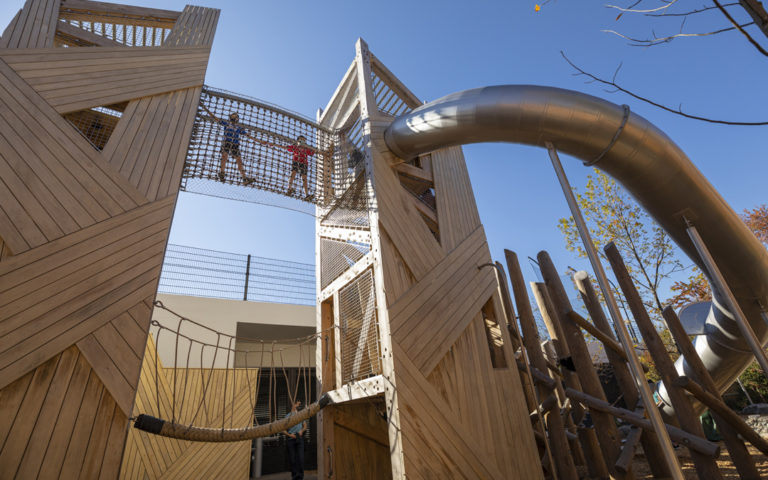 To ensure our tall structures do not feel intimidating, but instead invite play, we carefully design the lower portions of the towers to feel open and connected with other play elements.  Lower levels are often climbable on both the interior and exterior. Moreover, we plan for multiple routes of access and egress that speak to different abilities, risk-tolerances and play styles. 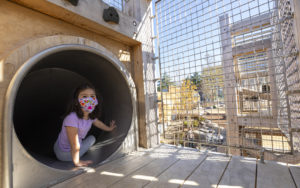 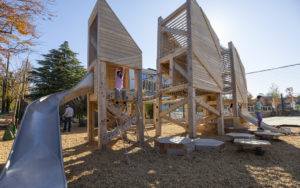 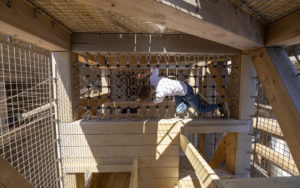 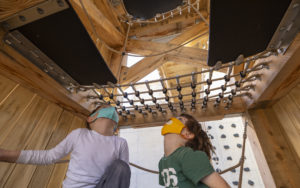 The school required the interior to remain visible for teachers and staff to supervise playing pupils while, at the same time, the playground had to respect the urban school’s neighbours’ need for peace and privacy. The final solution includes nearly solid cladding on the sides of the towers that face neighbouring homes while the other two sides are designed with steel mesh panels that let in plenty of sunlight and allow for easy supervision.

Moreover, the patterns of the cladding were imagined as blades of grass entangling in the wind, echoing the biophilia theme of the entire project.

While the height, colour and exterior may initially attract children to towers, it is the richness of interior play that keeps them engaged and wanting to come back. Over the years, our design and material vocabulary have increased tremendously, with the interior of towers packed with play opportunities at every level and in-between, too.  Designing for vertical play (or, “play guts” as we call them) is a tough challenge.  One must consider how the staying power of play will balance with the movement of children through the tower.  Designs must consider ways to avoid conflict while enriching possibilities for interaction. Interior play is not only physical: spaces should also be able to accommodate onlooker and solitary play, and appeal to a wide variety of senses. 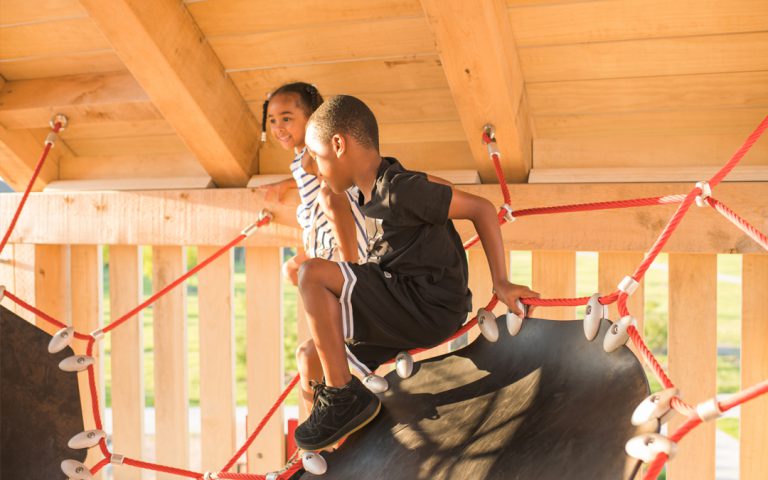 PARTS OF THE WHOLE

Playground towers do not only connect to other play equipment, they also reflect the larger site context. In fact, because of their height and thus, increased visibility, the responsibility to create a balanced relationship to the context may be greater for these pieces. In some cases, the connection might be a vernacular typology, in others, to a particular story being told through the design.

For example, at River Park in Breckenridge, Colorado, the two timber towers at the center of the playground feature angular rooflines and abstract cladding to emulate the peaks of the mountains. In downtown Toronto’s St. James Park, the main tower represents stacked wooden crates, in a nod to the nearby historic St. Lawrence Market. 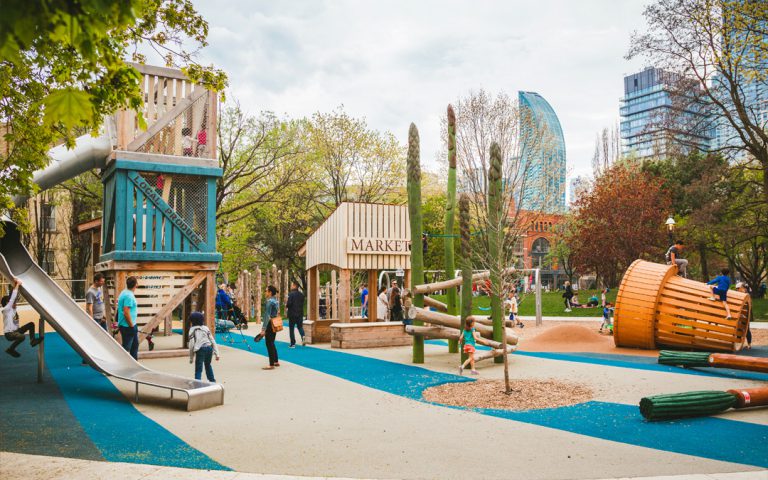 Having a tower at the centre of a playground may not be right for every space. For instance, smaller neighbourhood playgrounds may be overwhelmed by such a structure. Additionally, more challenging towers are best paired with smaller structures that, nonetheless, would feel tower-like to the youngest children.

Still, towers have become an absolute must for destination-level playgrounds or those located in larger parks that attract people from beyond nearby residences. This race toward the sky is understandable as it speaks not only to the urbanization trend of modernity (more people in smaller spaces), but perhaps to much older motives of adventures towards unknown heights in search of new vantage points and knowledges.