My son and I enjoy the brain-teaser in his Highlights magazines titled “What’s the Same? What’s Different?” I like to invite folks unfamiliar with our work to do something like this game on our webpage. I’m certain that scanning through our portfolio must conjure a similar brain response; the neocortex will try to organize what is similar and what is different.

We are proud of how diverse and site-specific each of our projects is, but I’d suggest that if you pin their images on a wall the collage is remarkably cohesive. There are fundamentally three different design languages spoken in all our projects. Each one has enormous potential for being expressed uniquely.

At Earthscape, we speak the languages of Architecture, Sculpture, and Nature.

*Architecture: Relating to the art or practice of designing and constructing buildings.  I suppose this definition describes everything from a yurt to the Chrysler Building.

Imagine we’ve just had our big design kickoff. A goal has been set that we’ll throw some of the play experience way up high…Perhaps the idea is to give an opportunity to feel that little flittery-fluttery thing in our bellies that great heights can give us. Maybe we’re inspired by the decision-making that happens when climbing a pine? Do we need to fit a huge amount of play into a really tight space? These are all good creative prompts for a play-centered piece of architecture.

Some towers are designed like civil-engineered fire towers, simple and functional looking. These are an armature for play. Other towers get pretty stylish. Some resemble Jurassic blades of grass, or an unraveling red ribbon, or modernist mountain peaks. 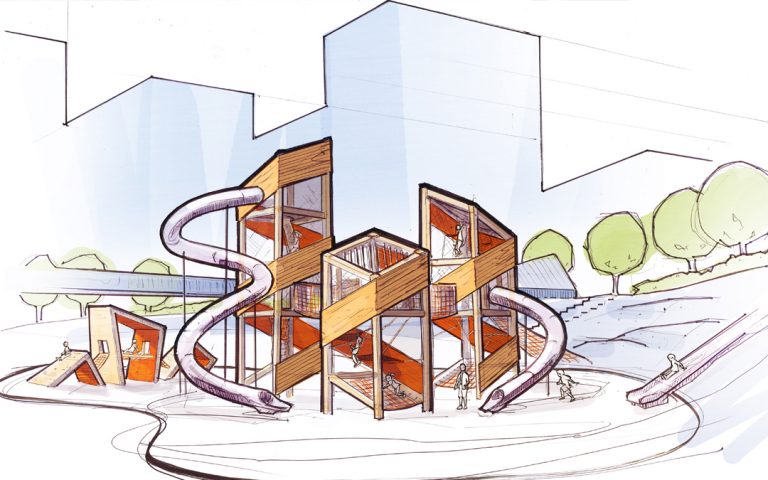 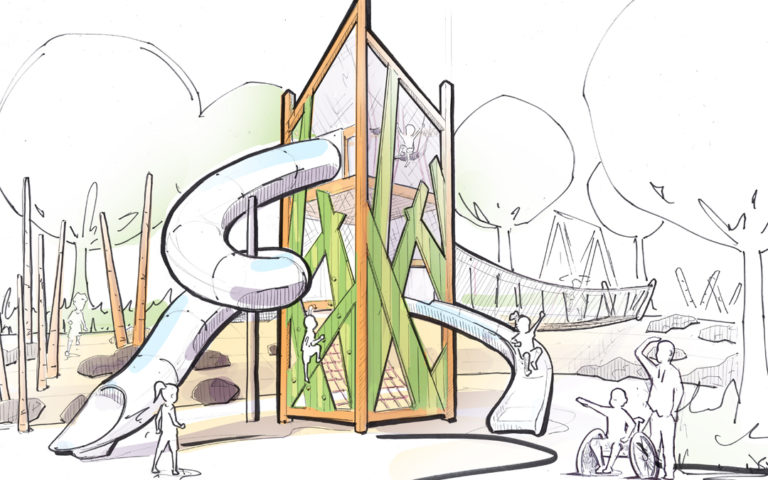 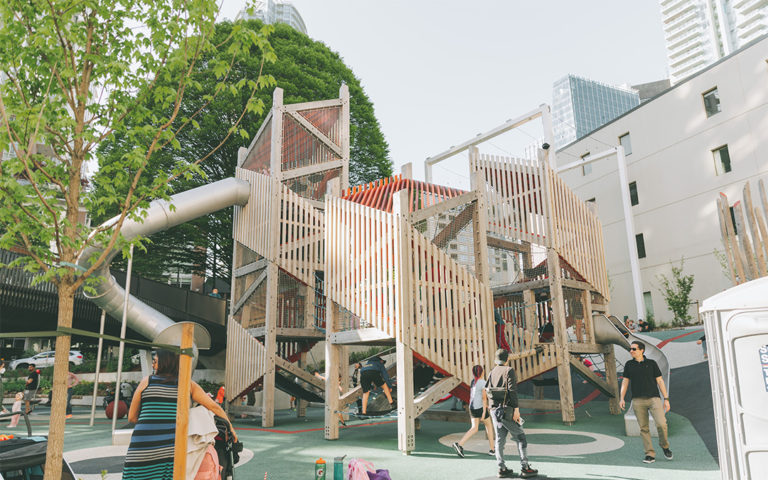 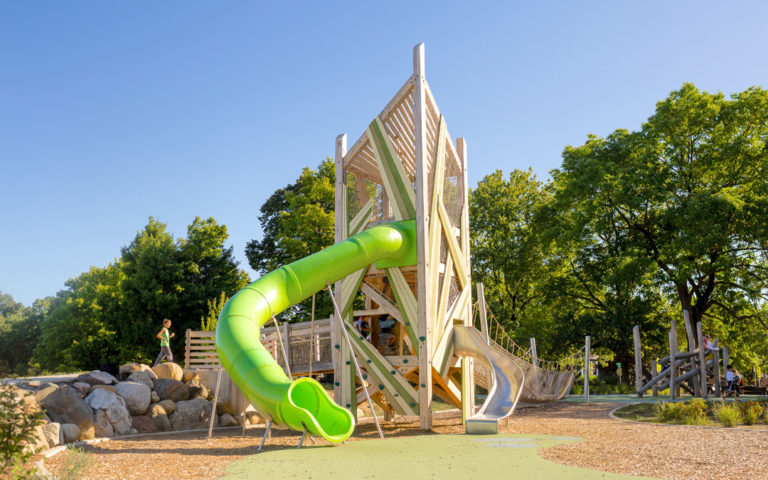 Visualize your favorite world-class tall building, opera house, or place of worship. Does that piece of architecture have a story to tell? A play tower can contribute to a narrative as well.

Once upon a design, the Glass City Metro Park towers in Toledo started with research into the ecological character of the region, pre-industrialization. Trace strongholds of an oak savanna ecosystem have endured and are now being deliberately nurtured along the Maumee River. We studied this habitat’s native birds, searching for something special to be our muse, and landed on the Blue Grosbeak for its striking colours and precious rarity.

The towering twin “Feathers” make a big impact. Can a play structure have swagger? I think this one does. They’re a chisel tip in a room full of pencils. As an object in space they are exuberant and lift the viewer’s gaze skyward. From a technical perspective, the massive scale and curving glulam columns push these into the category of engineering marvel. Most importantly, for children, they provide affordances for complex and undirected adventure.

I wouldn’t be able to ballpark how many towers our craftsmen have built. Having designed well over 50 to date, I still keep finding an idea in vertical play to explore – an aesthetic or technology in timber construction to learn from. There is no shortage of creative opportunities within the language of Architecture.

*Sculpture: The action of processing plastic or hard materials into works of art. A fun example is The Bean in Chicago. I refuse to refer to this sculpture as Cloud Gate. Give it up, Anish Kapoor.

While exploring an art museum recently I overheard a conversation between two strangers, one of whom seemed to be a museum director visiting from another city. They were looking at a mobile by Alexander Calder and sighing in unison. The director half-joked, “We have the same problem with a Calder in our gallery”, he said. The intention of the artist’s vision is movement… but these pieces never move. Nobody is allowed to touch it! 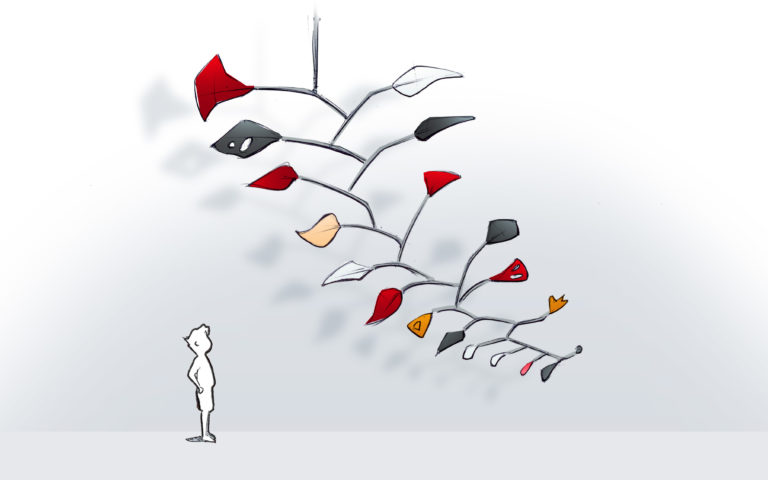 Dylan’s Sketch of a Calder Mobile

We invest much time and care into creating sculptures that are beautiful, animated, and inviting. They are designed for both the impact on the imagination and the touch of little hands and feet.

Every so often cities will commission playable public art, but it’s rare. Occasionally we’ll meet a client with a request for a dramatic creature, like a gator or dragon, however incorporating play hasn’t registered as a goal. These projects can get turned away if they can’t be persuaded to flip their priorities and put children at the forefront of the design.

It’s our aim to make sculpture that is both beautiful and irresistibly hands-on. Shall we make a pact right now that all public sculpture should be playable?

Though made of wood, our sculptures are hardly “wooden”. They are centers of gravity for lively play.

Sculptures can take on many forms, literal or abstract. Some of my favorites are extremely graphical. The red ribbon that wraps the towers at Rainbow Park in Vancouver transitions into the surfacing and then rises out of the ground again into an angular frame for roaming on and through. It’s unusual and stylish; completely open-ended for the imagination. 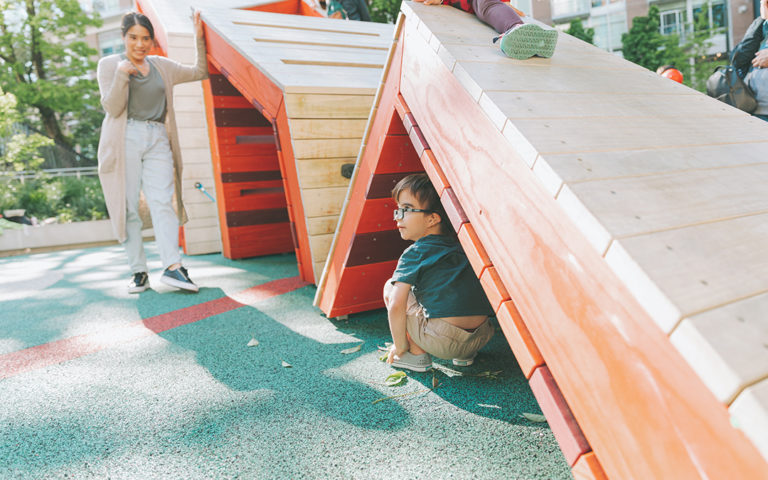 On the other end of the spectrum are more representational sculptures. For the Amira playground, we were tasked with making something that visually reads like an Arabian horse. The client noted with concern at least 5 times during the design kick-off that the sculpture could not look kitschy (*Kitsch: also called cheesiness or tackiness, is art or other objects that appeal to popular or uncultivated taste because they are garish or overly sentimental. The culmination of this style was first achieved when someone’s Great Aunt glued a seashell to a picture frame.)

After our call, I sent over three quick pencil sketches to test ideas. One was based on tower construction and looked like a giant chess piece. Yikes. The other two were sculptures and explored different moments in time. One was a grazing scene, with the head bowed low allowing children to hug its face. The other looked to be at a swift gallop as if rounding a corner and kicking up swirls of dust. We studied a little further and decided to use the peaceful and huggable posture. 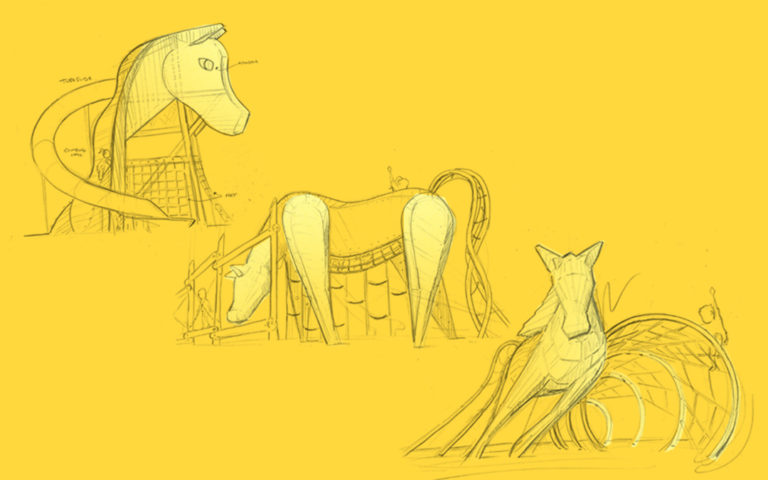 Working from our Netherlands office, my colleague Niek took on the modeling phase and developed a way of subtly increasing the level of abstraction to create elegant lines and forms. For example, the legs are all the same simple swoop shape that mirror and repeat, creating a visual rhythm that is incredibly successful.

Whether more abstract or literal, each play sculpture has the potential to attract people of all ages through its character and magic.

*Sidenote: Do NOT use a tube slide for a creature’s tongue or trunk or something. It gets suggested all the time but it won’t turn out well. Put the seashells down. 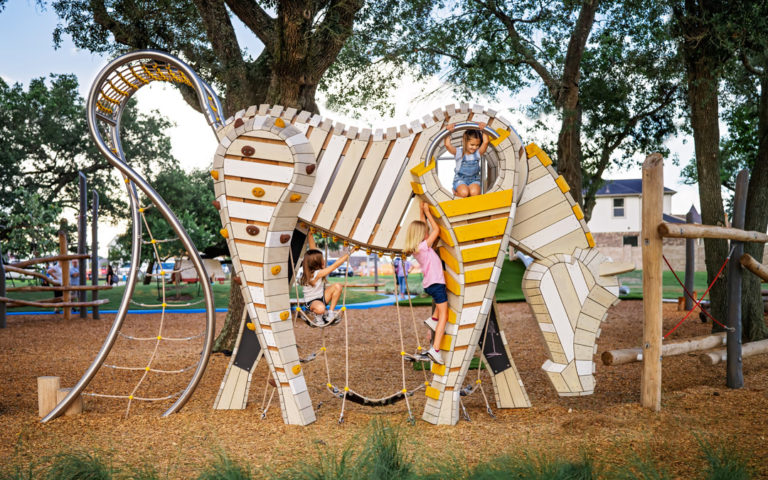 *Nature: The phenomena of the physical world collectively, including plants, animals, the landscape, and other features and products of the earth.  My son refers to this as “loggy stuff”.

The justification for nature play is well described in our other writings and by developmental researchers around the world; what I’d like us to consider is the designer’s role in creating something “of nature”.  When we were brought on the team to develop the Presidio Tunnel Tops Outpost playscape, we knew we’d get to push natural playground concepts to a new level. 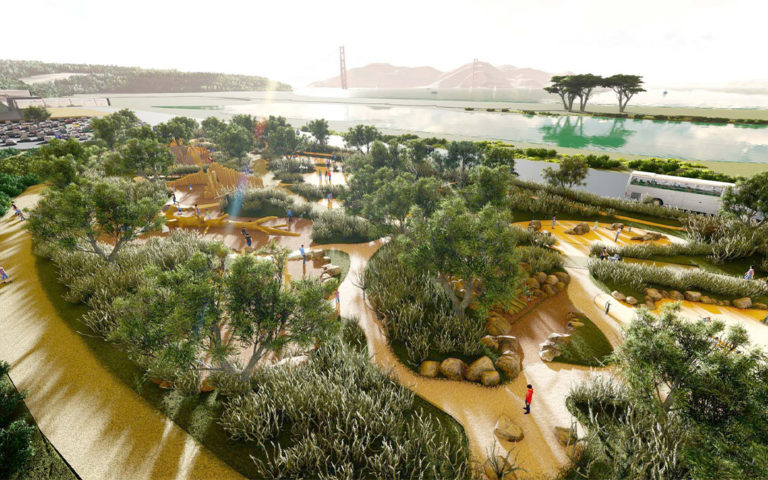 Built over a highway, the engineering and site constraints were unique complexities. The desire was to let the wood features, and indeed the full site, be as unprocessed as possible.  Take the large 250-year-old fallen oak. After a heavy storm, we were notified that the tree had fallen in a local farmer’s woodlot. We immediately called up the Presidio team and asked if they were game to turn this into a play feature.

The tree had snapped into a few large sections. We retrieved them from the forest and started the design work. First, we cut away anything that could not exceed load testing requirements and started removing the bark and sapwood layers so we’d have 100% heartwood. Next, we did a 3D scan so we could pull its likeness into our software and explore how it fit within the space, rotate it to find the most play-rich and safety-compliant orientation, and determine footing locations for engineering coordination.

We were in a conversation with the raw material of the tree, wanting to honor its form as much as possible while making it a successful play element.

The old age that had factored into the tree’s uprooting led to some problematic rot in the root flare. This would not do. However, the tree had actually led us to an unexpected design opportunity! In our model, we hollowed out the core to see how much structural material would be left and if a tunnel would be large enough for kids to safely scramble through. Several weeks of carving later we had a >24” diameter crawl-thru and zero concerns about soft wood. The Fallen Tree is now a favorite feature at the Presidio. It was through a conversation with its intrinsic character that we were able to achieve a great natural play piece. 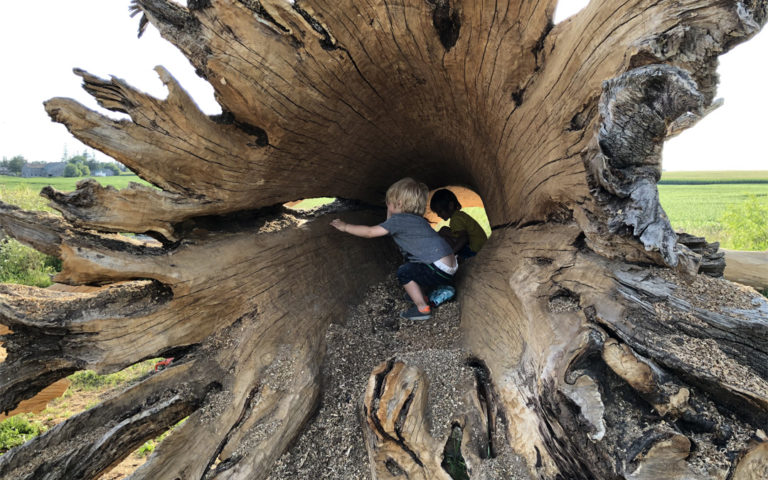 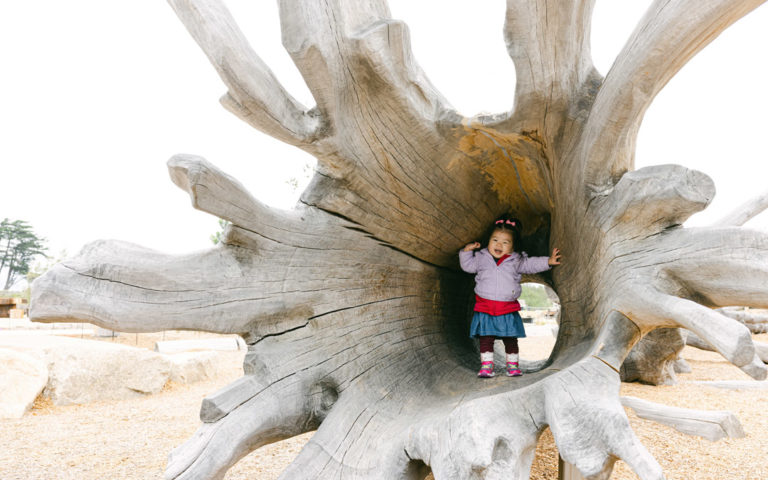 E.E. Cummings wielded the English language in a way that revealed the innate shape and texture of letters and words. The language of nature play is not dissimilar. We wield natural materials in a way that requires both high precision and light touch. Letting the character of the wood reveal itself makes every log-built structure a one-off.

Next time you look at our portfolio or visit one of our playgrounds I’d like you to consider our primary languages; Architecture, Sculpture, and Nature, and how they are being expressed. Pay attention to how their aesthetics complement one another, how varied their construction and form, and how they round out the opportunities for diverse play experiences when used in concert. 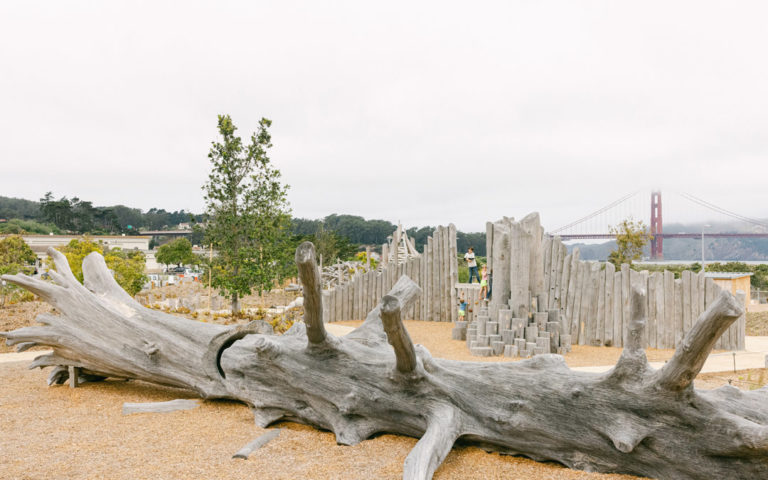