Amid Toronto’s downtown condos, tucked just off of Queen Street West, Lisgar Park features an industrial themed playground that plays homage to the site’s history of warehousing in the early 1900s.  Designed in collaboration with Victor Ford & Associates, the light posts in the existing park are laid out in a grid pattern in reference to the wood beam supports from the old factory. This inspired the design decision to embrace the site’s industrial history and integrate it into the playground elements.  The playground centrepiece is a large gear sculptural climber that is sunken into a poured-in-place rubber mound.  Post-and-rope climbers have been customized to appear as pipes to contribute to the playground’s theme.  A taller log jam® climber provides greater challenge for older children and brings a natural element to Toronto’s urban core. 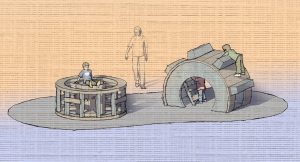