The Wanuskewin Heritage Park interpretive playground integrates play and exploration into this historic site in a meaningful way.  Developed in collaboration with Crosby Hanna & Associates, the design invites children to explore the space and challenge themselves while making subtle connections to the cultures and stories of the many groups of Indigenous Peoples who have gathered in this place. The focal point of the playground is a collection of two towers and two viewing platforms that echo the unique architectural form of the nearby Interpretive Centre.

Wanuskewin Interpretive Playground was awarded a 2021 Excellence Award from the Canadian Society of Landscape Architects for Small-Scale Public Landscapes.

“An excellent playground design that provides a rich and diversified play space, with custom structures and elements that go well beyond prefabricated structures and equipment. The components of the playground are well detailed, with impeccable finishes and precise assembly; they combine to form a sculptural ensemble that is both attractive and challenging. The elements, the ground materials, the colours and the topography strongly but subtly express a sense of place that resonates with the area.”

Wanuskewin Heritage Park is located along the Opimihaw Creek upstream of the South Saskatchewan River, just outside of Saskatoon. This unique and culturally significant site has been used by many peoples over the course of its 6,000 year history. The design for the playground at Wanuskewin Heritage Park is inspired by the site itself and the many indigenous nations that have used the site for living, hunting, gathering, and spiritual practice. Some of the archaeological discoveries made on this site pre-date the Egyptian pyramids.

‘Playground coming to site in Saskatchewan older than the pyramids‘ – The Globe and Mail, September 28, 2018

A junior sculptural hut has a similar form to the ‘Buffalo Rubbing Stone’ that is found on the site. Abstract sculpture and log climbers are more challenging climbing elements for older children that can also be used as gathering spaces. A circle formed by boulders and posts create a gathering place or informal performance area. Small nodes can be found around the playground, creating ideal spaces for sharing and story-telling. 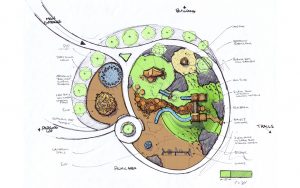 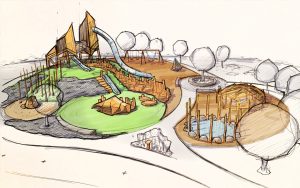 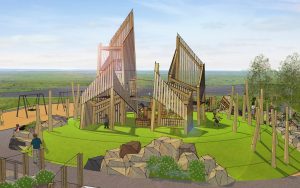 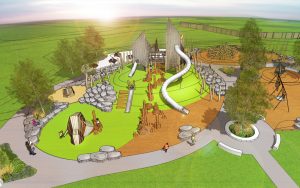 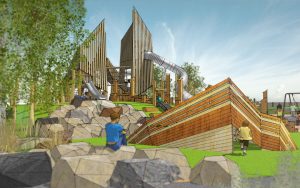 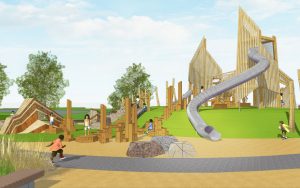